“The world as we have created it is a process of our thinking. It cannot be changed without changing our thinking.” ― Albert Einstein

The 11th Principle: Consent was awarded an art grant at the 2019 Alchemy Art Fundraiser for our theme camp, the Traveling Consent Tent, which premiered at Euphoria 2019. As long-standing members of the Georgia Burn Community, we were thrilled to receive our community’s support for our efforts to educate and spread awareness about enthusiastic consent culture. Unfortunately, recent revelations about decisions made by the Board of Directors (BOD) of Flashpoint Arts Initiatives (FAI) are not in alignment with our values and are incongruent with the consent culture we have worked so hard to create. As such, we did not accept funding and the 11th Principle Theme Camp will not attend the Alchemy event. Our parent non-profit, Enthusiastic Consent, is publicly announcing they no longer support the Alchemy event or FAI.

A summary and timeline of recent events that prompted our decision:

In 2016 the FAI BOD began working on a Conduct Committee charter. Approximately one year later, the Conduct Committee was officially formed. (Timeline) At the time, the 11th Principle saw this as progress towards creating a culture of enthusiastic consent and increasing community safety. Alchemy and Euphoria are not sanctioned by Burning Man, and therefore not held to the same transparency requirements as other regional burns. As such, more recent BOD minutes from 2017-2019 were not available on the FAI website until August 2019. Unfortunately, these BOD minutes revealed that the Conduct Committee was placed on “indefinite hiatus” in October 2018 after the Alchemy event. As of August 2019, it is still non-existent.

While the general idea of FAI putting the Conduct Committee on hiatus without notifying the community is disappointing, what is more troubling are the reasons described in the minutes: “A. [redacted] TPO (temporary protection order) – raises the broader question of whether we want to enforce outside orders between parties regarding issues not arising at our events. B. Conduct committee [sic] placed on indefinite hiatus – until the question of appropriateness is resolved.”

The [redacted] TPO situation mentioned in the BOD minutes is complicated. We wish to respect the privacy of the parties involved, but in order to understand where the FAI BOD has failed the community, we realize that including some details are necessary to move forward.

Prior to Alchemy 2018, a female victim of domestic violence provided the FAI BOD with the most recent active Temporary Protective Order (TPO). The victim had previously provided FAI with prior TPOs and the no contact order that was part of a negotiated guilty verdict which resulted in the male perpetrator being banned from attending FAI events in 2016 and 2017. Despite FAI BOD’s policy on restraining orders and his previous restriction from FAI events, the male perpetrator was allowed to attend Alchemy 2018. Additionally, he was given a prominent position on the Effigy Build Team as the team lead. The male perpetrator used his house as the site for the effigy build for several weeks prior to Alchemy. Furthering the problem, he was still on probation with the State of Georgia for the domestic violence until January 2019.

During Alchemy 2018, the male perpetrator was recognized by a participant who knew of the situation and sought out a former BOD member. Together, they notified the Ranger Lead who said they would handle the situation, but the male perpetrator remained at the event. After the event, a member of the Conduct Committee, whose name will remain confidential, said “we were unaware of his previous ban because it was before our committee was formed. I looked through everything I could and saw no mention of him. We were not made aware of this until the event, and there wasn’t much we could do at that point. I can’t say much more for now, but wanted to let you guys know that we have been made aware of it, and will be looking into it as soon as our hiatus is over.” Despite now having information of the situation, he was allowed to attend Euphoria 2019.

It was not until July 2019 that the 11th Principle became aware of the complexity of the situation, after a concerned community member shared FAI’s response to an email they had sent regarding the male perpetrators history. FAI’s email refers to “alleged violence against his ex-wife.” Their use of the term “alleged” indicates that the negotiated guilty verdict for “Battery – Family Violence” and the Temporary Protective Orders were not believed or honored by the FAI BOD. The male perpetrator was also briefly listed as Alchemy 2019 Effigy Team Co-Lead on the Alchemy Facebook group on July 17. It became obvious that the male perpetrator’s presence at FAI events was an intentional decision that disregarded FAI’s stated policy on protective/restraining orders received via email, also referenced in February 2018 minutes.

Placing someone who is on probation for domestic violence in a prominent team lead position, and allowing them to host builds at his home, all the while disregarding a legal Temporary Protective Order, creates a space where abusers are given elevated social status. The 11th Principle whole-heartedly believes in people’s capacity for change and supports sensible reintegration back into the community, but we do not believe that inflating the power dynamic between perpetrator and victim is consistent with consent culture. This type of situation affects the entire community. FAI has failed to recognize the problem and/or accept responsibility for allowing a previously banned participant – still on probation for domestic violence – to hold a leadership role.

The 11th Principle cannot support FAI’s resistance to community concerns, their unwillingness to acknowledge their oversight, and their continued refusal to simply engage in discourse about how to prevent such a discrepancy from ever happening again. We refuse to associate the 11th Principle with events that a) do not prioritize consent culture; b) disrespect and ignore the concerns of sexual violence or abuse survivors; and c) dismiss and ignore the community when they approach with concerns and requests for clarification.

The FAI BOD has had multiple opportunities to discuss and correct their reactive decisions but, to date, they have not paused to examine the effect of their decisions. This type of behavior falls directly into the first and second stages of consent culture in burn communities: “ignoring” and “reacting” (see full list below). All three FAI websites reflect the very elements of these initial stages. Alchemy and Euphoria https://www.alchemyburn.com/conduct and https://euphoriaburn.com/conduct both link to a broken conduct report form on their parent site http://www.flashpointart.org/conductreport. 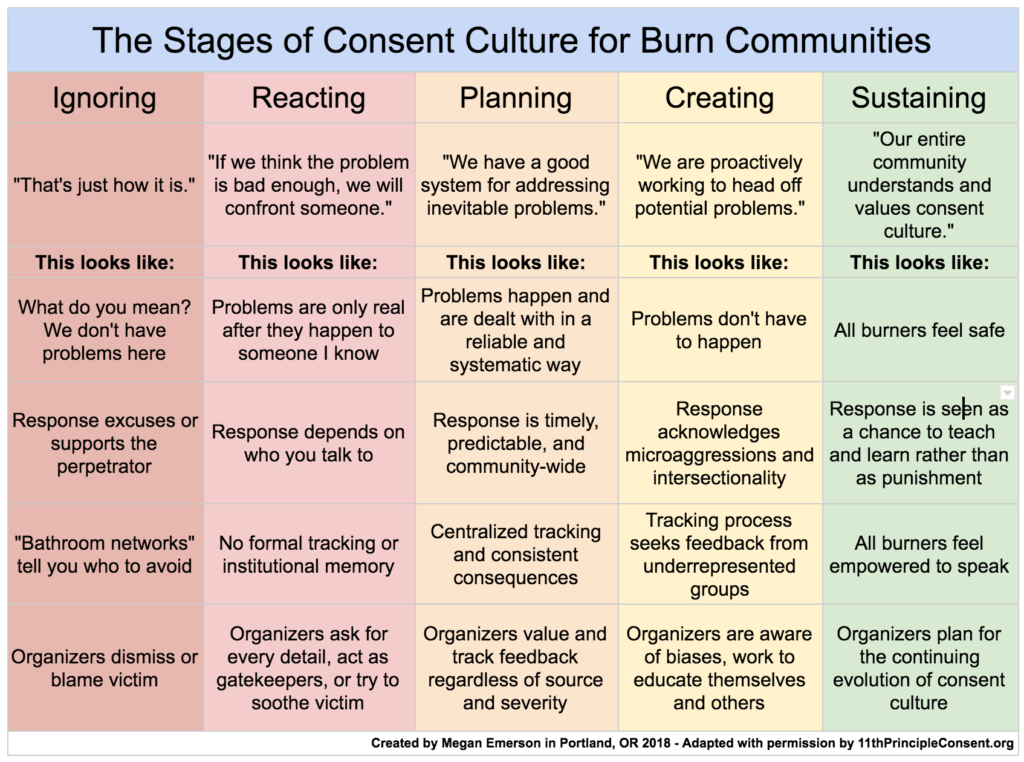 Burns are about rejecting the paradigms of the default world to create a more open, compassionate, and equitable community. However, we cannot change the world until we change ourselves. It is the 11th Principle’s deepest hope that this incident inspires organizational reflection and transformation of FAI’s leadership culture.

To speak directly to FAI’s leadership: a clear decision regarding your inclusion policy must be made. E.G. Is anyone welcome, including people with known histories of violence, and anyone worried about it doesn’t have to attend? Or, do we want a community where women, people of color, and all marginalized groups feel heard, supported, and 100% joyful about attending FAI events. Which type of inclusion is “radical?”

Our specific concerns include:

Our suggestions for improvement:

While we recognize that many of these suggestions are directly related to organizational capacity, it would be ineffective to call out problematic behaviors without suggesting specific changes that, ideally, would address organizational problems and demonstrate a commitment to developing consent culture. We say these things because we care, and we want the best for our Burn community.

Please note: the decision to boycott Alchemy 2019 is a response to the actions and statements of FAI’s Board of Directors as a whole entity and should not be interpreted as a personal directive towards any one individual.